I sit in a chair and open up a brand new deck of playing cards. Approximately twenty feet away is an upside down felt hat spinning around on a motorized turntable. I take out a single card and snap my wrist in such a way that I propel that card towards the hat with the intention of placing it in the interior of the hat. The card flutters past its target. I pull out another card and take a deep breath as I focus on the hat, which completes and begins another cycle. I notice the quality of light in the room. The contrast is sharp but not bothersome. I flick the card with non-aggressive force and watch it reveal itself. This card falls short. The next sweeps off to the left. I find yet another card in my right hand between the thumb, middle, and index finger. It is gone and replaced with still another card. I am moving at a quicker, though relaxed pace, than when I first began. I have thrown seven hundred cards. I am measuring time. I begin to notice the dispersion of cards surrounding the turntable. I realize there is a metamorphosis unfolding before me. A three dimensional drawing is taking place though I try not to think of composition. I try and let it draw itself. It is difficult not to make judgements and comparisons. Sometimes, I can’t help myself. I try to throw some red just above and to the right of the hat. The card lands where it lands despite my so-called aesthetic sensibility. I become frustrated and start to throw the cards at a much quicker pace in an attempt to shake off my self-conscious behavior. It seems to help and I gradate into a slower rate of movement. I acquiesce. I slowly come to terms with the moment as I admire the flight of each card. I have forgotten that I am throwing cards. Then, suddenly, I am startled as a card hits the brim of the hat, and rolls in. I am for a moment taken by the sensation of it all. I am distracted. I immediately begin to aim at the interior of the old hat once again. A few cards find their way into the felt target after some amount of time but the thrill is gone. The so-called target is merely an illusion, which I no longer require. I throw now for the sake of throwing. I have thrown nineteen hundred cards. I am passing through time. What I feel is so immaterial and so objective that the event unfolding seems to occur outside the body. I am absolutely lost in action. I have surrendered. I swam upstream until my mind and body became too weak and tired. This was my intention. Now I am underwater at last. I have become passive through engaging in a specific activity. I am in a state of non-knowledge achieved through a process that required specific knowledge. I consistently see the cards suspended in flight now. I too am in a condition of suspended animation. I have reached a certain state of sublimity through tension. The sound of the motor that turns the hat no longer interferes with the silence; it increases it. I have thrown two thousand eight hundred and eight cards. I am lost in time, which itself is lost in infinity. I have no more cards to throw. I sit in undiminished solitude. I have evaporated. I am gone. I am in the air. I am falling. Everything is clean and clear. I am the hat and the motor and the playing card. I am the wall and the floor. I am everything and nothing. I am no better or worse than the chair I am sitting in. There is no logic here. 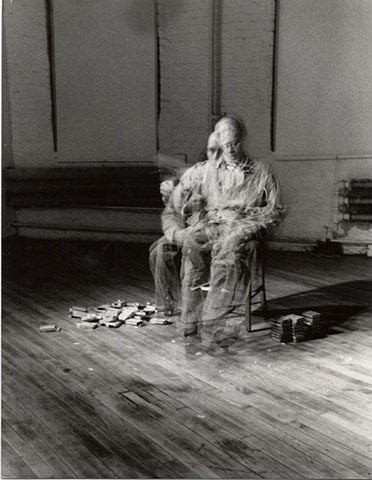